If you’re building a California home next year, it will have to produce more clean energy — and in some places use more electric appliances — than ever before. 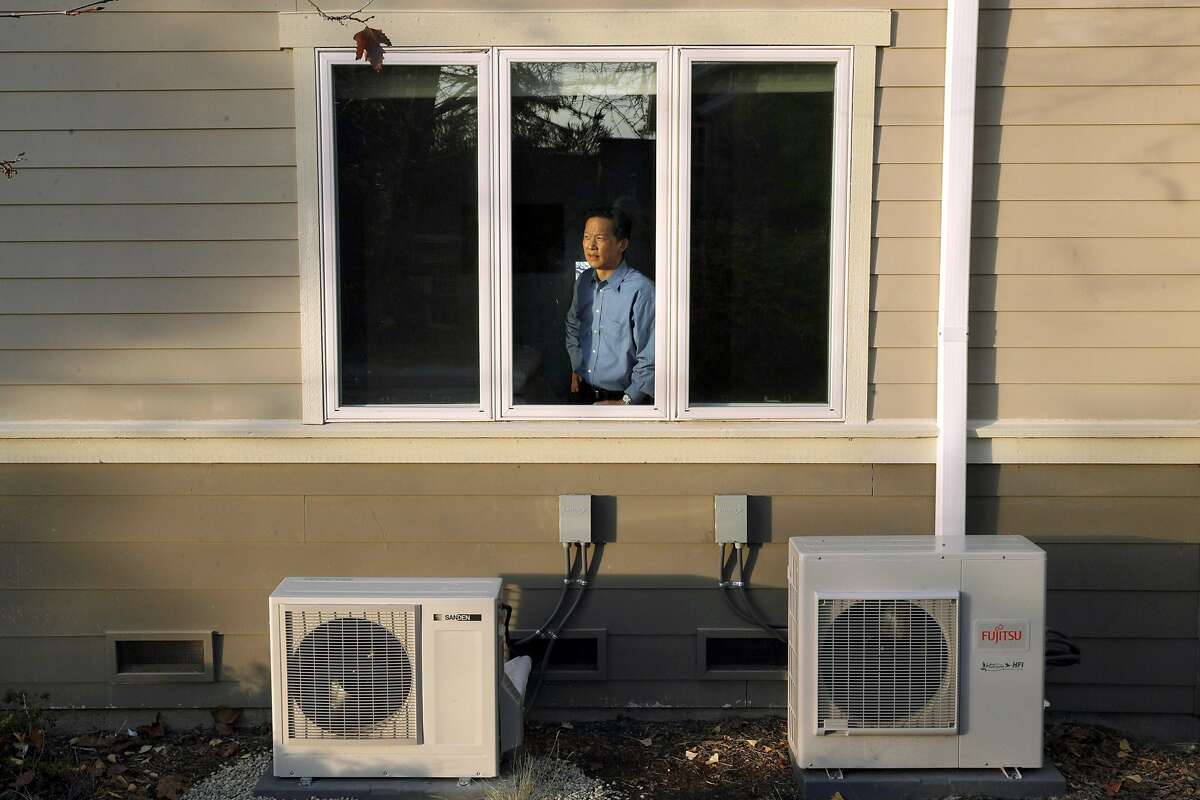 Kwok has compressors for the water heater and ductless heating and cooling units at his Lafayette home, which he converted to electric power.

If you’re building a California home next year, it will have to produce more clean energy — and in some places use more electric appliances — than ever before.

Another major new policy, taking effect in a handful of jurisdictions, involves reducing natural gas use: In the Bay Area, if you’re building a new home in Berkeley, San Mateo, Menlo Park, San Jose or Marin County, you either won’t be able to install gas appliances, or you will have to make your home more energy efficient if you do. Similar laws in 14 other Bay Area cities await California Energy Commission approval.

If you’re building a house in the new year, here are answers to common questions:

Q: What is the new home solar requirement?

A: Updated state building efficiency standards require all low-rise single-family and multifamily buildings to have a rooftop solar system whose size varies depending on projected electrical usage.

Your house is exempt if it has less than 80 continuous square feet of rooftop space unshaded by trees, hills, and adjacent structures. Some people living in the desert, and those with two- or three-floor homes, need not have quite as big a system. If you have batteries to store the solar power, the system can be 25% smaller.

To comply, home builders can either buy rooftop panels or lease them from a solar provider. Developers may also be able to fulfill the requirement through community solar — such as a collection of panels nearby that can provide energy to a number of homes — if state regulators approve. The only proposal seeking to do so, from the Sacramento Municipal Utility District, has not yet been approved by the Energy Commission.

Q: How much will the solar requirement cost?

A: The California Energy Commission estimates that the solar mandate, along with other building code changes, will add $9,500 per home in construction costs, but save homeowners $19,000 in energy and maintenance costs over 30 years. A commission study projected that the cost passed along to the home buyer would be marginal — in other words, developers will largely absorb the added cost.

The California Building Industry Association, which represents about 3,000 companies that build 84% of the state’s homes, estimated that the changes will add $8,000 to $13,500 to the price of home construction depending on location. The building association predicts that the cost will be passed along to home buyers and some may find themselves priced out of the market.

“When you go to the bank, they don’t provide you a loan based on how much you’re going to pay for utility bills,” said Andrew Kosydar, legislative advocate with the association.

Q: What cities are banning natural gas in buildings?

Menlo Park and Marin County have enacted restrictions on natural gas but allow gas stoves; Marin allows gas fireplaces as well. In Menlo Park, high-rise and nonresidential buildings must be all-electric. Life science buildings and emergency operations centers are exempt, and restaurant and cafeteria kitchens can ask for an exemption.

San Mateo doesn’t impose an outright ban on gas appliances, but sets a higher energy-efficiency standard for buildings that use them. Restaurants and multifamily residential buildings are exempted.

The policies are controversial: The California Restaurant Association and some developers have sued municipalities over the gas bans, arguing they will add costs.

Q: How much difference will restricting natural gas make to the environment?

A: The California Energy Commission says that 26% of the state’s greenhouse gas emissions come from buildings, some of it from heating — a common use of natural gas.

“There’s no way to meet carbon or clean energy goals without electrifying the building sector,” said Panama Bartholomy, director of the Building Decarbonization Coalition, which brings together nonprofits, businesses and governments advocating the use of electric power. “If you get to carbon neutrality, you can’t still be burning fossil fuels inside homes.”

Of course, electricity in California is generated partly from fossil fuels — though in diminishing proportions. Last year, natural gas accounted for at least 30% of the state’s energy (and probably more, since 22% of the power on California’s grid comes from out of state, and some of that almost certainly is from natural gas).

Anthony Kovscek, Stanford University energy resources engineering professor, said natural gas bridges a gap that can’t be met by solar production until technology to store energy — holding it in reserve for when the sun is down — becomes more cost-effective.

Before the state’s energy supply goes 100% green, banning gas in homes could actually result in more CO2 emissions, Kovscek said. He estimated, for example, that generating and transmitting electricity to heat a shower when the sun is down produces roughly three times as much CO2 as using gas directly.

Others say the limits on gas will help the environment.

“It is clear that building all-electric homes reduces greenhouse gas emissions, and doing so has the potential to continue reducing emissions as the electric grid transitions to zero-emission sources,” Tom Paine, research analyst at ConSol Energy Consulting, said in an email. But concerns remain, especially about how much it will cost homeowners, he said.

Some Californians have embraced the trend. This year, Wei-Tai Kwok did something he never thought was possible — cut off gas to his 4,000-square-foot Lafayette home. In just a few months, he retrofitted the heating and air conditioning, water heater, stove and fireplace to all-electric, not burning any fossil fuels, for a cost of about $56,000. (Installing electric appliances in a new home, as opposed to retrofitting an existing one, would have been much cheaper, he said.)

“We shouldn’t just keep doing the status quo. Now we’re learning, with climate change, it’s dangerous and not good for us,” said Kwok, the volunteer chairman of the nonprofit the Climate Reality Project in the Bay Area, who also has rooftop solar panels and electric cars. “I love challenging myself to think about whether humans can change our behavior to save ourselves from the climate crisis — and is it really that hard?”

Kwok is pleased with what he says is a more comfortable and better performing house. His heat pumps get a room to the desired temperature quickly and minimize waste. He also prefers his electric induction stove because it’s safer and faster, although he’s had to learn how to stir fry in a new way. Sitting at his kitchen table flooded with light from floor to ceiling windows looking out to the East Bay hills, he summed it up: “Life in an all electric house is good.”